Starbucks Hacks to Save Some Calories

If you’re trying to lose weight or live a healthier lifestyle, one thing that often trips people up is their ingrained habits.

If you visit Starbucks on a regular basis and just don’t know what to order that fits in with your new healthier eating habits, you aren’t alone. Luckily, there are tons of tweaks that you can make that will not only save calories but ensure you’re eating healthier, less processed food.

In the last few years, large chain restaurants and coffee shops started posting calorie counts on their menu. This is in accordance with regulations that came in with the 2010 Affordable Care Act.

Starbucks was one of the earliest businesses to comply. Although the info was available on their website earlier, putting it on the menu really forced people to confront the reality of their choices.

If you want to save calories at Starbucks, the first thing you should do is check out the calorie counts of your favorite treats and see whether there are any healthier alternatives.

The size choices at Starbucks are pretty well known, but did you know that there’s a smaller alternative?

The Short is eight ounces. It’s never advertised because executives are hoping that you’ll opt for the larger sizes if they’re more prominently displayed. However, any drink on the Starbucks menu can also be prepared in a Short size, which is the healthier and slightly cheaper option.

Granted, the cost to up-size to a Tall is minimal, but if you’re looking to save calories, Short is definitely the way to go.

Opt for a Milk Alternative

The default milk that’s used to craft most Starbucks beverages is two percent cow’s milk. However, in recent years, Starbucks has introduced a whole roster of alternative milk. It started with one percent and skim, then they rounded out their menu with almond, coconut, and soy milk.

If you’re looking to save calories, reach for plant-based milk instead of the regular dairy milk. The healthiest options available at Starbucks are almond or soy milk, which contain more protein and fiber than coconut milk.

Specify How Much Syrup You Want

The various flavored coffees and beverages at Starbucks typically use syrup to impart both flavor and sweetness. If you want to save calories on your next Starbucks order, but still want to enjoy a flavorful favorite, ask for less syrup.

Typically, anything sweetened will use between three and six pumps of syrup, depending on the size. A typical pump adds 20 calories and five grams of sugar. You can always ask your barista to use fewer pumps and experiment with how many you need to still get the taste without the added calories.

Use Spices Instead of Syrup to Flavor Your Beverage

If you’re really looking to cut down on calories, use the free spices available at most Starbucks locations to flavor your beverage — instead of adding in pumps of calorie-heavy syrup.

If you want to order something like mocha or flavored latte, but want to avoid calories, order a regular coffee or latte. You can then use the nutmeg, cinnamon, vanilla, or chocolate powder that can be found at the drink pickup counter to add additional flavor to your beverage.

Make Your Own Skinny Drinks

Although there are “skinny” or non-fat options available for most of the flavored beverages offered at Starbucks, they’re typically made with skim milk and sugar-free syrups. These syrups are full of artificial sweeteners, which are even sweeter than regular sugar and have been linked to an increased risk for type 2 diabetes and metabolic disorders.

If you want to avoid the negative health implications of artificial sweeteners, stick to your regular drink, but avoid whipped cream.

It seems simple, but many people don’t think of it. If you’re trying to save calories, but really want to enjoy your favorite drink, ask for it iced.

Most iced beverages at Starbucks are less calorific than their heated counterparts. This is because some of the calories from the milk are replaced with ice.

Another thing that you can do to offset the calories from your favorite Starbucks iced beverages is to ask for them half-sweet. This means that the barista will put in either less or half the amount of sugar syrup.

Most of the iced teas and refresher beverages that Starbucks serves are quite flavorful already and don’t need a huge infusion of sweetness.

Opt for a Smoothie Instead of a Frappuccino

If you’re not a huge coffee fan, chances are your go-to order at Starbucks is a Frappuccino. This beverage is a blended base of cream and ice that’s spiked with a variety of flavors ranging from cinnamon and butterscotch to strawberry and green tea.

If you’re looking for a sweet, fruity treat, but don’t want to ingest all the calories that are lurking in a Frappuccino, try out their new line of smoothies. All their smoothies are made with protein powder and a whole banana, along with natural flavors. Plus, they come in Strawberry, Orange-Mango, and Chocolate.

Stick to the Basics

One of the best things about Starbucks is the sheer variety of drinks that you can make with their simple base ingredients. Especially when their seasonal drinks — like the Pumpkin Spice Latte or Unicorn Frappuccino — are all over the Internet, it’s hard not to be tempted to indulge.

However, if you’re looking to cut down your calorie intake, the best thing you can do at Starbucks is stick to the basics. Their drip or cold-brew coffee, brewed tea, or their Caffe Americano are all under 200 calories and are still so delicious. 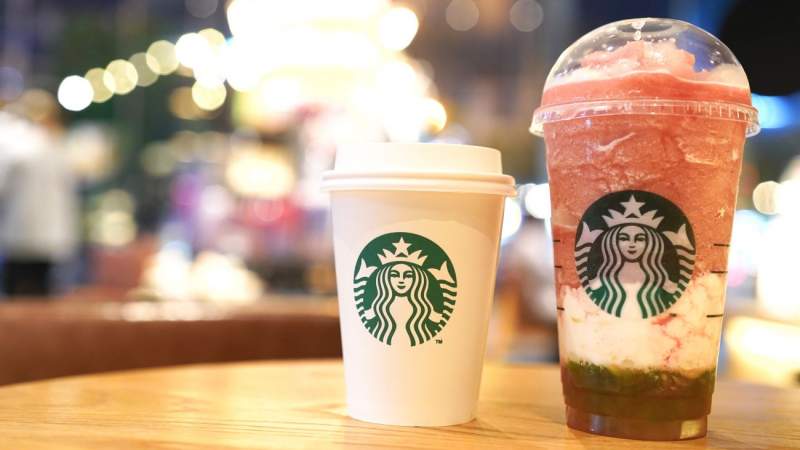