A Quick Guide to Yoga

If you’ve never taken part in a yoga class before, all the benefits of this form of exercise might surprise you.

Not only are you able to benefit physically from practicing yoga, but you’ll also be able to tap into a whole host of emotional, mental, and spiritual benefits. These benefits include better flexibility and posture, increased muscle strength, a more positive outlook, and improved focus, relaxation, and self-esteem.

Yoga is one of the oldest forms of exercise in the world. First mentioned in sacred texts known as the Rig Veda, it began as an art practiced by the Indus-Sarasvati civilization in northern India.

Some of the earliest writings on yoga were transcribed on palm leaves, which were subsequently lost because of the fragile nature of the medium. Since there is no concrete evidence, most people estimate that the practice of yoga is between 5,000 and 10,000 years old.

Yoga first spread to the West in the late 1800s, when a man named Swami Vivekananda gave a talk on it at the 1893 Parliament of Religions in Chicago. However, it took more than 50 years before the first studio opened in the United States. The Hollywood school of Indra Devi was established in 1947.

From there, yoga became an extremely popular form of exercise as people began to see the benefits of it throughout the various aspects of their lives.

There are so many different types of yoga out there. However, all of them start with the same basic postures and encourage practitioners to transition between them with the aid of breath and meditation.

To help understand, here are some of the most popular forms of yoga in North America.

One of the most popular forms of yoga in North America is Hatha yoga, which is often practiced in a heated room. In Sanskrit, hatha is the term for any type of yoga posture, which is why it’s been adopted by many North American teachers to refer to this less-specific style.

If you sign up for a Hatha yoga class, you’ll likely be taught a series of popular postures, along with anything else that strikes your teacher’s fancy. Hatha classes are great for beginners because they’ll give you a basic understanding of the practice of yoga and guide you through the most frequently used postures.

However, keep in mind that since Hatha yoga is so broad, classes will vary greatly depending on your teacher’s style. So, once you find a teacher you like, it’s worth sticking with them.

Vinyasa yoga is also common in North America and uses the breath to guide practitioners through a series of postures that flow into each other. The postures and flows depend on your teacher’s taste and ability, but there are many typical “flows” that you’ll quickly get to know if you take part in more than one class.

Vinyasa developed out of Ashtanga yoga in the 1980s. It has remained popular because it’s more athletic and challenging than the regular Hatha practice. Despite that, vinyasa still places an important focus on breathing and relaxation as you push your muscles further.

Like Hatha, Vinyasa can be practiced in a heated room or at room temperature.

Ashtanga is one of the oldest styles of yoga still practiced today. In Sanskrit, the word “Ashtanga” translates as “eight limb path.”

When you take part in an Ashtanga class, you’ll complete the same series of poses every time, which date back to the foundation of the practice. Each class starts with 10 repetitions of two types of Sun Salutations and moves on from there.

In Mysore, India, where the founders of the method first taught, people come together to practice Ashtanga without an instructor present; it’s expected that everyone will know the sequence and can complete the series of poses at their own pace. In North America, Ashtanga classes usually have a teacher present.

Kundalini yoga is an intensely spiritual practice. Its goal is to help release the body’s kundalini energy, the trapped energy in your body that’s centered around your lower spine. Teachers help students to release this energy by teaching classes that are fast-paced and filled with intense, core-burning postures and breathing exercises like chanting and mantras.

Kundalini devotees practice in all-white clothing, which they believe serves as a filter of negative influences.

Another popular type of yoga that’s often practiced in North America is Anusara yoga, which is considered a modern-day version of Hatha yoga.

In an Anusara class, students work through a series of poses that are focused on opening the heart, although the sequence of poses will generally vary depending on the teacher. There’s a strong focus on posture. As such, teachers will correct students either vocally or by physically assisting them when their posture needs improvement. Movements within and between poses are coordinated with the breath.

Each class ends with a savasana, which is a meditation to help absorb the teachings and honor the experience that the class shared together.

One of the newer forms of yoga is Baptiste yoga. This practice was created in the 1940s by Walt Baptiste, whose aim was to create a spiritual practice that was accessible to modern practitioners.

Teachers of a Baptiste yoga class aim to explain poses to students clearly. This is done so they can understand the technique and how that particular posture was included in the flow.

Baron Baptiste, the son of founder Walt Baptiste, is actively teaching classes and training students today. He is a well-respected teacher with an impressive yoga lineage.

Iyengar yoga is named for its first teacher, B.K.S. Iyengar, who designed this practice as a way for people to focus on achieving meticulously precise alignment.

During an Iyengar class, teachers guide students through a series of poses with the assistance of props like blocks, straps, and blankets. This method is done, so everyone can always ensure they’re properly positioned.

While Iyengar is not the most active type of yoga, people who take part are often surprised at how exhausted they feel afterward.

Yin yoga is a slower practice that’s designed to help improve posture by guiding students through a longer series of poses that are held for up to five minutes at a time. These long, slow poses stretch the muscles and connective tissue. This helps encourage relaxation through meditation and deep breathing.

Most of the poses in a Yin class are either seated or supine. Oftentimes, props are used to ensure that each student is in the optimal position. Once everyone is settled, time and gravity do most of the work as students relax into the poses.

This practice is great if you have mobility issues or want to relax after a long day at work.

One of the most interesting yoga practices out there is yoga nidra, a restorative practice that aims to lead students into a deep state of conscious rest. Instead of practicing active poses, the only real “pose” that students will encounter in a yoga nidra class is the supine corpse pose (savasana). Rather than leading you through different poses, your teacher will guide you in a meditation designed to focus your awareness on different parts of your body.

Although many people do fall asleep during yoga nidra — especially when they first start practicing — the aim is to spend the class time in a blissful, deeply-rested yet conscious state.

Another newer form of yoga is Jivamukti yoga, which was founded in 1984

In a Jivamukti class, you’ll be led through a series of Vinyasa-style flowing poses that emphasize our connection with the Earth. The poses in each class are complemented by a series of chants. These chants are designed to help connect the physical practice with the spiritual teachings of yoga.

New research is being conducted every day that equates to yoga with improved wellness and healing. So, if you’re curious about the ways that yoga can impact your life, all you need to do is get into a class and try it for yourself. 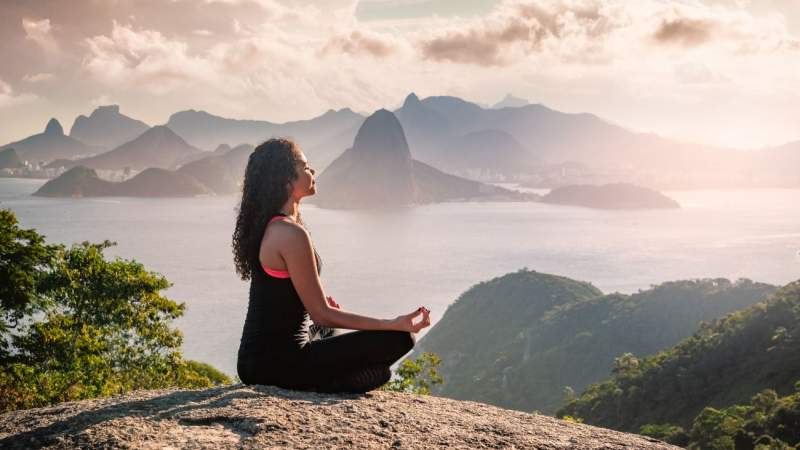