If you have an office job, you’re probably used to sharing a lot of things with your co-workers. Don’t get caught in the trap of sharing your germs with them, too! So many people feel pressured to go into work, despite being sick with a cold, flu, or other easily transmittable illness.

In the United States today, there are many jobs where sick days aren’t necessarily a given. Many managers and bosses praise employees for coming in while they’re sick — even if it puts others at risk.

Today, we’re going to talk about the reasons you should take a sick day and how to feel less guilty about it.

Just because you feel like you can survive a workday being sick doesn’t mean you should. The illnesses that we’re talking about below are common but may be more serious than you think.

After the common cold, the flu is the second most common illness that keeps people home from work. It’s characterized by a fever, chills, runny nose, cough, and mental and physical exhaustion.

Most healthy adults recover from the flu within two weeks. However, it can be extremely damaging to someone who is vulnerable to complications, like pregnant women, those with weakened immune systems, and older adults. Complications from the flu can include ear infections, bronchitis, and pneumonia, which can be deadly if left untreated.

The flu spreads quickly in an office environment. You can pick up the illness by inhaling a droplet of the virus after someone coughs or sneezes. Also, you can transfer it to your own eyes, nose, or mouth after touching an infected surface.

Anyone who has ever eaten a dubious piece of meat and thrown up for days afterward knows what it’s like to have the stomach flu. Formally called viral gastroenteritis, this illness is characterized by nausea, vomiting, and diarrhea. While it’s most frequently caused by contaminated food, you can pick it up from an infected surface.

For adults who are otherwise healthy, having the stomach flu is an annoying and unpleasant inconvenience. However, for young children, older adults, or anyone with a weakened immune system, it can have severe consequences.

The common cold is the number one reason why most people stay home from work. Symptoms include a runny nose, sore throat, cough, and body aches. However, some people choose to work with this illness because it often doesn’t become severe enough to justify staying home.

Despite that, it’s important to rest and give yourself time to recuperate. Otherwise, a common cold can easily turn into an acute ear infection, pneumonia, or strep throat.

How to Reduce Guilt Over Your Sick Day

Many of us have been told by our bosses that we should stay home if we’re feeling ill. However, in practice, this is a lot harder than your manager makes it out to be. Maybe you’re in the middle of a project and have a lot of people relying on you to complete your work on time. Other times, an important meeting makes you feel like you need to drag your sick self out of bed in order to stick to your schedule.

The next time you’re sick, remember these tips and think twice before going into work.

Even if you’re just nursing a runny nose and sore throat, you’ll never recover without allowing yourself some rest. If you push your body to its limit, you’ll wind up being sick for weeks.

Instead, take a day to really rest, so don’t work from home. You’ll be much more useful to your team if you’re able to return at full strength, rather than dragging along for weeks.

You Can Make Someone Else Very Sick

Even if you’re a strong and healthy adult, transmitting cold and flu germs to your colleagues can have unintended consequences. You never know whether someone has a weakened immune system, is newly pregnant, or is vulnerable to cold and flu complications due to a condition like asthma.

Take it from the experts. Doctors believe that the average worker should take more sick days than they actually do. According to one government agency, even workers who do have health benefits and sick days often don’t use them.

Most doctors believe that if you’re feeling sick enough to wonder if you should go into work, you should err on the side of “no”.

Many people avoid staying home when they’re sick because they’re worried that their bosses will think less of them. Instead of worrying about impressing your boss with your stellar attendance record, impress them with your work.

You’re no use to anyone if you’re showing up to work too sick to function. Take a day off, recover, then come back and work hard to catch up once you’re well again.

Your boss might care about you as a worker, but their priority is always going to be the bottom line.

Ultimately, you’re the one responsible for your health. Don’t push yourself to work when you feel ill and don’t be afraid to use a sick day to take the time you need to recover. 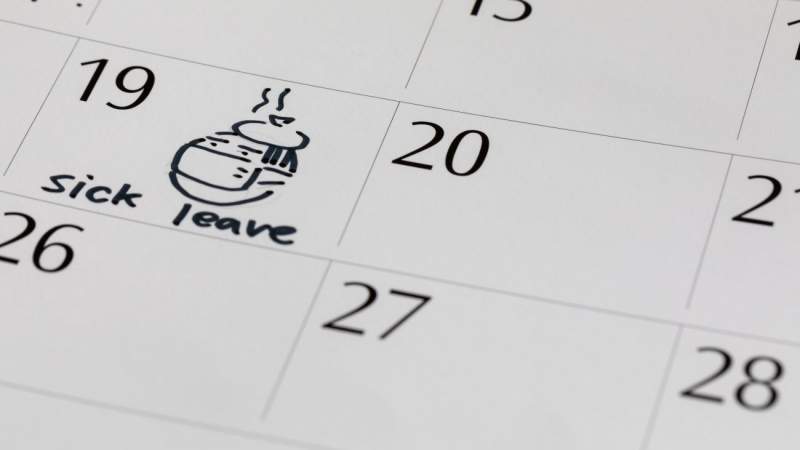