The Essential Guide To Living With Type 2 Diabetes

Most cases of type 2 diabetes (T2D) are treated with a variety of measures, including diet, regular exercise, weight loss, and medications.

To help cover all these treatments, we have put together this guide that will go in-depth on living with T2D.

Diabetes affects more than 30 million Americans, with the great majority (90 to 95 percent) having T2D.

Today, T2D is a public health emergency that exacts a physical as well as a fiscal toll. The physical toll relates to increased risks for kidney disease, eye disease, heart disease, and nerve disease. In 2017, the fiscal toll of T2D was estimated at $327 billion.

Insulin is a hormone produced by your pancreas, which allows glucose (our main source of energy) to enter our cells. Think of insulin as the “key” to unlock the full potential of glucose. If this key does not fit into the “lock”, glucose remains in your blood — instead of going into your cells and being broke down, or metabolized — leading to high blood sugar (hyperglycemia) and eventually T2D. Therefore, T2D is caused by insulin resistance.

There are several risk factors that increase your chances of developing insulin resistance. These include:

Most individuals with T2D are diagnosed with a fasting blood sugar test or glycated hemoglobin (A1C) test.

Foods that are good for diabetes

Diet is an important part of the management of T2D.

A balanced diet that is characterized by moderation is the blueprint for those with this disease. You need to incorporate an array of foods to optimize blood sugar levels in an effort to stave off or stabilize the complications of T2D, such as heart disease, kidney disease, nerve disease, and eye disease.

Carbohydrates (“carbs”) have a bad reputation among those with T2D, especially given the fact that they are quickly converted to glucose after ingestion, thus raising blood sugar levels.

Not all carbs are bad, especially those with no or very little added sugar. Plus, most health care professionals recommend that diabetics do not need to cut all carbs from their diet. It is a matter of choosing your carbs wisely.

For instance, whole grains — which are considered complex carbohydrates — have no significant effect on blood sugar. Examples of whole grains include brown rice, oatmeal, quinoa, millet, chia seeds, and amaranth.

You should eat generous amounts of vegetables if you have T2D. Vegetables are loaded with fiber, which helps stabilize blood sugars. Furthermore, they contain very little fat or salt in their natural forms. Strive for a variety of colors, such as dark greens, reds, oranges, yellows, whites, and even purple.

U.S. guidelines recommend at least 2.5 cups of vegetables per day. Fresh vegetables — preferably eaten raw or lightly steamed, roasted, or grilled — are preferred, but plain frozen and canned vegetables can provide almost equivocal nutrition, as long as they are low sodium or no-salt-added.

Fruits contain essential vitamins, minerals, and fiber and are naturally low in fat and sodium. But you should be careful as fruits tend to have more carbs as compared to vegetables, as well as higher amounts of sugar.

Generally speaking, fruit should be fresh, although plain frozen or canned fruit without added sugar are also good choices. Other examples of good fruit choices include sugar-free or low-sugar jams or preserves and no-sugar-added applesauce.

Protein is an integral part of the diabetic diet.

Considering how much food contains protein, you have lots of choices, including beef, chicken, fish, pork, turkey, seafood, beans, cheese, eggs, nuts, and tofu. You should choose lean cuts of meat and trim the skin off poultry as well as the excess fat off meat.

Consider plant-based proteins (e.g., beans, nuts, seeds, or tofu) to provide nutrients and fiber not found in animal products. Other examples of good protein choices include fish and seafood (e.g., salmon, tuna, shrimp, or scallops), chicken and other poultry (choose breast meat, if possible), and eggs and low-fat dairy.

Dairy products should be used in moderation in the diet of a type 2 diabetic and ideally should be low-fat. Some examples are one percent or skim milk, low-fat yogurt, low-fat cottage cheese, and low-fat or no fat sour cream.

Although fats, oils, and sweets can make it harder to manage your T2D, they can be incorporated in manageable, small amounts.

You should be sure to choose natural sources of vegetable fats (e.g., nuts, seeds, or avocados) and keep portions small, as these fats are high in calories. Also, consider foods rich in omega-3 fatty acids (e.g., salmon, tuna, or mackerel) and plant-based oils (e.g., canola, grapeseed, or olive oils).

Beverages are often forgotten when coming up with the proper diet to manage T2D.

When imbibing your favorite drink, you should be aware of variables such as calories, sugar, salt, or fat contained in said drink. You should make it a habit to read all food labels, so you not only know what’s in your food but also what constitutes a serving.

The wise beverage choices for diabetics include:

Foods that are bad for diabetes

Now, our focus shifts to foods that can cause weight gain and cause blood sugar to skyrocket. Hence, the foods that are bad for those with T2D.

Canned vegetables can have significant amounts of added sodium, which is why those stating low sodium or no-salt-added should be sought out.

Vegetables prepared with excessive amounts of butter and cheese not only present increased sodium loads but also increased fat/cholesterol loads, which are not good for diabetes.

Lastly, if you are a fan of pickles or sauerkraut, these should be avoided if you are a diabetic. Limiting sodium and saturated fats are important because many people with T2D also have high blood pressure and high cholesterol.

Canned fruits, especially those packaged in a heavy syrup, obviously can wreak havoc on blood sugar levels. The same is true for regular jam, jelly, and preserves and fruit rolls as well as sweetened apple sauce.

Protein from fatty cuts of meat (e.g., bacon) and highly processed meats (e.g., bologna) can pose problems for those with diabetes due to their high sodium and fat content.

Deep-fried proteins, including tofu, should be avoided by diabetics. The same is true for full-fat cheeses and leaving the skin on poultry as well as beans prepared with lard.

Excessive protein has also been implicated in the development of kidney disease, which is very common in diabetics.

The same is true for fats, oils, and sweets, especially those with trans fats. Consider searching for the terms “partially hydrogenated” or “hydrogenated”, as trans fats can be present in foods even when the label reports zero grams of trans fats.

Lastly, coconut oil and palm oil should be consumed in limited quantities or avoided altogether, especially if you are a diabetic with heart disease.

Other Food to Avoid

Highly processed grains, such as white rice or white flour, will cause your blood sugar to spike. The same goes for cereals made of little to no whole grains and lots of sugar.

Potatoes and corn, although vegetables, count as carbs, which can have an extreme effect on blood sugar levels.

Lastly, white bread and fried tortillas (both of which are derived from white flour) are also bad for diabetes.

Diet tips for living with diabetes

Aside from the good and bad foods for diabetes above, you should make an effort to cook at home most days of the week instead of dining out, as it is easier to keep track of what you are eating.

Today, a big deal is being made about the “Mediterranean diet” and T2D. It has been suggested that newly diagnosed T2D patients had greater benefit from a low-carbohydrate, Mediterranean-style diet than from a low-fat diet. Furthermore, it has been concluded that the long-term therapeutic effect of a high-protein diet is not superior to that of a high-carbohydrate diet in the treatment of T2D.

Bottom line, it is okay to be picky about what you eat.

How to lose weight with diabetes

When you live with T2D, what you eat and how much you exercise can influence the disease.

As diet and exercise are the cornerstones of the treatment of T2D, adherence should culminate in some weight loss. Modest weight loss of five to 10 percent of body weight has been associated with significant improvements in blood sugar, blood pressure, and cholesterol in patients with T2D, which are even greater with losses of 10 to 15 percent. In extremely obese patients, weight loss surgery has been shown to improve diabetes control and, in some situations, normalize glucose levels.

Other complementary techniques that have been used to treat T2D include acupuncture, acupressure, meditation, and aromatherapy.

Early initiation of medicines is associated with improved blood sugar control and reduced long-term complications in T2D. Classes of drugs used for the treatment of T2D include the following: 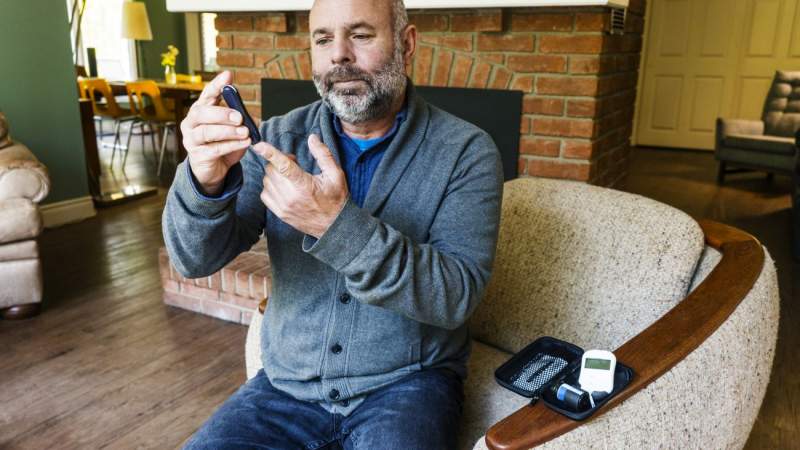