When a cancer moves from its place of origin to a new location in the body, it’s known as metastatic cancer. For a patient or family whose loved one has just received this diagnosis, it can be devastating and hard to understand.

The most common lung cancer is non-small cell lung cancer. At the most basic level, cancer develops when cells grow in an uncontrolled, abnormal way. They don’t function like normal cells. Rather, they interfere with the normal functioning of the body. Cancer develops as a result of a mutation in a person’s DNA.

Oftentimes, the mutation is a result of the normal process of aging, but it can also be due to unhealthy habits like smoking or exposure to harmful fumes or gases. A cancer typically metastasizes, or grows into a different location, in the later stages of the disease.

Where Can Lung Cancer Spread?

When a person is diagnosed with lung cancer, it means that there are abnormal, cancerous tumors in some part of their lungs. The lungs are made up of two large, spongy organs, which means that cancer can develop within them for a long time before it’s spotted.

The most commons areas where lung cancer spreads includes the adrenal glands, liver, lymph nodes, brain, and bones. Lung cancer spreads to these common areas when cells from the tumor detach and travel through the bloodstream to nearby tissue, where they attach and form a secondary tumor. In some rare cases, doctors may find metastases from lung cancer in the kidneys, stomach, intestines, or pancreas.

It’s estimated that 40 percent of people diagnosed with lung cancer already have metastases present in other areas of their body.

Symptoms of Stage 3 and 4 Lung Cancer

If someone has already been diagnosed with cancer, it can be difficult to isolate the symptoms that occur when lung cancer metastasizes.

Typically, people diagnosed with lung cancer exhibit a wide variety of symptoms, starting with chest-focused symptoms like intense coughing that brings up phlegm or mucus tinged with blood, shortness of breath, or pain in the chest. People sometimes attribute these symptoms to other causes, like bronchitis or pneumonia. Sometimes, lung cancer can develop for years without obvious symptoms, which is why it’s important to get a doctor involved if you notice any of these symptoms.

There are many different treatment options, which depends on the location of the metastatic cancer, as well as its size and stage. According to the National Cancer Institute, once lung cancer metastasizes, it’s generally considered incurable, so the goal of treatment becomes preventing future growth, controlling the size of the tumor, and managing symptoms. Since there is no cure for cancer, health and pain management is of the utmost importance.

Some common treatments include the following.

Chemotherapy is the most common form of treatment for cancer. It’s used to shrink the tumor and prevent it from growing larger. Plus, it’s often used in conjunction with medication and can be a prelude to surgery.

Chemotherapy uses various types of medication that circulate through a patient’s system and target the cancerous cells. There are lots of different combinations of chemotherapy drugs designed specifically for each patient by their doctor.

Laser therapy is a type of ablation therapy that uses a laser to destroy cancer cells. It’s often used in a situation where the tumor is blocking an airway, in an effort to carefully clear space and encourage easier breathing.

If your oncologist is using a regime of medication to target cancer cells, this process is targeted therapy. The drugs that they use target substances in the body that the tumor requires for growth, in an effort to slow or even completely stop the growth of the cancer.

There are a variety of medications used for this type of therapy, which can be given either orally, or intravenously.

Depending on the location and size of the tumor, surgery may be possible. The goal is to remove the tumor, as well as any healthy cells and tissue that may have been exposed to cancerous cells.

There are many unhealthy habits or practices that have been identified as contributing to cases of metastatic lung cancer.

Breathing in harmful substances is one of the key risk factors for lung cancer. Some examples include people who live close to asbestos or regularly breathe in air pollution or industrial substances like arsenic or gasoline. However, the largest risk factor for lung cancer is smoking. It’s thought that nearly 87 percent of cases of lung cancer in the U.S. today are smoking-related. Quitting smoking is one of the most important things that you can do to avoid increasing your risk factor for this deadly condition.

Metastatic lung cancer is treatable, but life expectancy isn’t long. The best thing you can do for your health is to quit smoking if you currently smoke and avoid environmental and industrial pollutants. This will keep harmful irritants out of your lungs, and ensure your long-term health is protected. 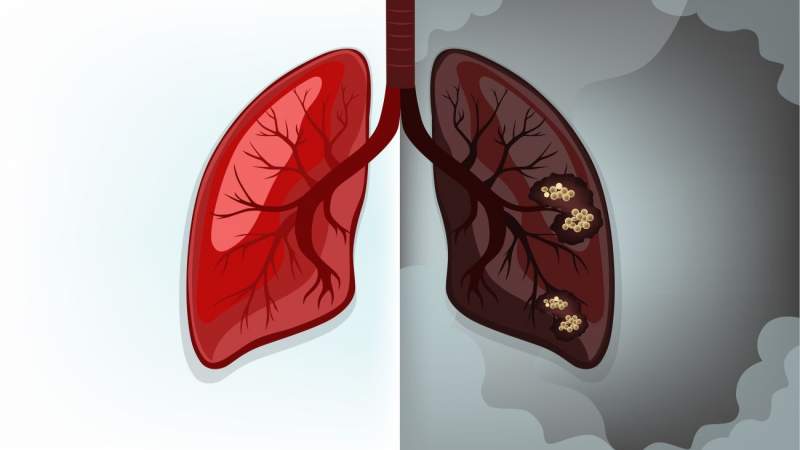