What Does the Color of My Phlegm Mean?

Life is full of uncomfortable questions. Questions like “Why are we here?” or “What’s the purpose of all of this?” or “What am I sitting on?” come to mind. Well, you might as well add “What does the color of my phlegm mean?” to that list.

Thanks to the Internet though, we don’t have to ponder that question out loud. Instead, we can do our own research and learn all about our bodies independently. For example, did you know that phlegm, often called sputum, is secreted by cells in the lower airways of the respiratory tract? It’s thicker than saliva and at any given time can contain dead cells, foreign debris, bacteria, white blood cells, and many other infection-protecting immune cells. The variations in phlegm composition, and color, can also tell you a lot about your overall health.

Though self-analysis of one’s own phlegm is an insufficient substitute for a visit to your family physician, there’s no harm in learning. Today, we’re going to break down what the color of your phlegm can tell you about your health, when you’re in the clear, and when it’s time to visit a professional. Sound simple? Great! It’s time to shine a light on the color of your phlegm.

Clear mucus is completely normal. Think of it as the base color of phlegm. But just because your phlegm is clear doesn’t necessarily equal a clean bill of health. An abundance of clear phlegm can be a sign that your body is trying to flush out an irritant. If you notice an abundance of clear phlegm, you could be suffering from nasal allergies, viral bronchitis, or viral pneumonia.

The second most common color of the phlegm spectrum is white. A respiratory system that produces white phlegm, though not entirely normal, is very common. For the most part, white mucus is a sign of nasal congestion.

When you’re congested, your body has a harder time passing mucus through your respiratory tract. Instead of producing mucus at a steady stream like normal, the process slows down, creating mucus that’s thicker than usual and often cloudy and white.

However, if your white mucus is closer to being a solid than a liquid, it may be a sign that you have a bacterial infection.

If you find yourself spitting up yellow phlegm, then you may have an infection. Though symptoms of yellow mucus can’t diagnose your illness in and of itself, it does provide you with a valuable warning sign.

Yellow mucus could mean a number of things. It could mean that you have a viral or bacterial infection, a sinus infection, or even a lower respiratory tract infection. When the body suffers from one of these infections, it responds by sending white blood cells to the affected area in large quantities. Those white blood cells show up in your phlegm, often turning it noticeably yellow.

People often begin to panic when they start to see the color of their phlegm start to change. Though noticing some tinges of green in your mucus may be unsettling, it’s usually just a sign that your immune system is working hard.

Green phlegm is green because it’s typically filled with white blood cells, germs, and various cells and proteins that are commonly produced during a strong immune system response to a viral infection. Though you may be feeling symptoms of illness, odds are that your green phlegm is a sign that your infection is viral and can be resolved without treatment.

If you notice your body producing phlegm with a brown or rusty color to it, it may be signs of old blood.

For many, brown phlegm comes right after a stretch of pink or red phlegm, but that isn’t always the case. Brown phlegm could also be a sign of chronic lung diseases like cystic fibrosis, bacterial pneumonia, or chronic bronchitis. I’d try to avoid wading in the waters of self-diagnosis though. The important thing is that brown phlegm means old blood.

Chronic cigarette smokers are familiar with the sight of black phlegm, though familiarity doesn’t make seeing it more pleasant. Black phlegm can come as a result of inhaling a high amount of a black substance like coal dust or tobacco smoke. But it can also be a symptom of a serious fungal infection.

Pink means blood. If you find yourself spitting up pink-tinged or even red phlegm, then it’s usually a sign of something serious. Remember, brown phlegm signifies old blood, whereas red or pink phlegm is a sign of an actively bleeding condition.

Pink or red phlegm as a symptom could mean many things. It could be a sign of a lung infection, tuberculosis, congestive heart failure, and even lung cancer. If you’ve noticed that you’re coughing more than normal, producing more phlegm than average, and it’s coming up red or pink, then you may find yourself in a very serious situation.

It’s important to note that phlegm production is entirely normal. Your body is supposed to produce phlegm at a steady rate, but if the amount of it or the color of it begins to give you pause, then you may want to reach out to a professional.

So how much is too much? At this point in your life, you should already have an understanding of how much phlegm your body produces on a regular basis. What I’m saying is, increased phlegm production is easy to notice. It’ll get caught in your throat and you’ll probably cough more. Just those symptoms alone should be enough to warrant a doctor visit.

We will always air on the side of caution with this stuff because it could save lives. So, don’t be afraid to go get checked out. If only for your own peace of mind. 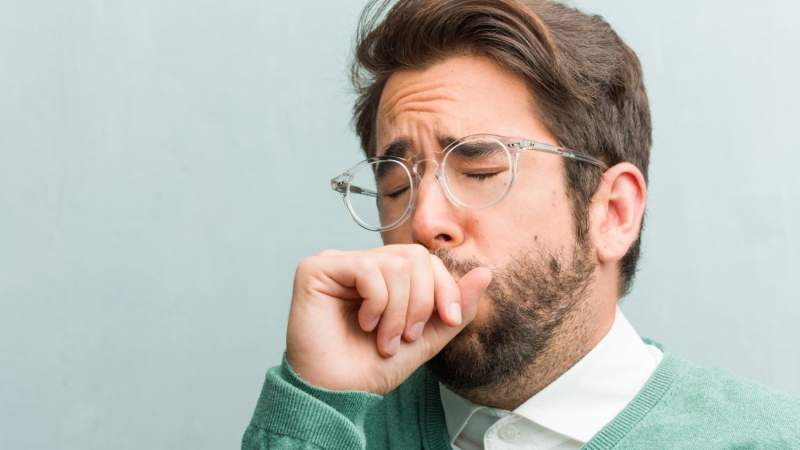