Measles Awareness: What to Do If Your Child’s Been Exposed

With the rise of the anti-vaxx movement, diseases that were essentially eliminated decades ago are now making a comeback, thanks to a small number of delusional people who have been fed false information about the safety of common childhood vaccinations.

The measles vaccine program was standardized in 1963, and currently the measles vaccine when given in its proper two-dose format is 97 percent effective against the disease. Before 1963, it’s estimated that between three to four million people per year were diagnosed with measles in the United States, with 48,000 of those being hospitalized, and between 400 and 500 people dying of the disease. While it is common for people to bring the disease back after traveling to countries that don’t have an active vaccine program in effect, the truth is that we’re seeing more cases of measles than ever before because unvaccinated people are making our population much more vulnerable.

Measles is a highly infectious disease caused by a virus. It was first identified in the ninth century by a Persian physician, and from then on it was studied by doctors, who were eager to see how this disease was able to pass so quickly around a close-knit population. 1757 marked the first time that a physician was able to point out how measles spread, and by 1912, there were around 6,000 fatalities related to measles that were reported in the United States alone every year.

Measles lives in the throat and mucus of an infected patient and can spread extremely quickly because coughs and sneezes literally propel the infectious virus out of the body. Measles is so contagious that 90 percent of unvaccinated people who live in close proximity to an infected person will catch it themselves.

Measles is a troubling disease because patients are infectious for four days before the visible symptoms kick in, and it often incubates for between 10-14 days, which makes it hard to determine whether you’ve been infected after exposure.

Common symptoms include a fever, dry, hacking cough, runny nose, and sore throat- all of which are typical of a more innocuous flu or cold. Some symptoms that are more unique to measles are inflamed or pink eyes, and white spots on the inner lining of the cheek — these are called Koplik’s spots and are a definitive diagnosis of the disease. Once a child is infected, they’ll display a characteristic skin rash that’s red and blotchy and will quickly spread over the whole body.

Unlike a common cold or flu which can last between one day and upwards of two weeks, people who are infected with measles often experience the disease in the same sequential stages.

For the first 10-14 days after a person is infected, they will display no visible symptoms as the virus incubates. After that, a person will typically display a mild fever accompanied by a cough, runny nose, and inflamed eyes. After feeling these fever-like symptoms for a few days, the red rash will appear, starting with the face, and working its way down the body. At that point, the person’s temperature will often rise to upwards of 105 F, which drops as the rash fades from the body.

Someone with measles remains contagious for a total of eight days; four days before the rash appears until it’s been present for four days.

Measles is caused by exposure to the virus, which is highly contagious. Once the virus replicates in the nose and throat of someone who is infectious, they can spread it easily by coughing or sneezing. The virus is then inhaled by other people, and the cycle continues. The virus can live for hours on an exposed surface, where it can infect someone if they touch the microscopic particles, then use their fingers to touch their eyes, nose, or mouth. 90 percent of unvaccinated people exposed to someone with measles will catch the disease themselves.

While there used to be millions of cases of measles reported every year in the United States, only a small percentage of these were fatal. Mostly, it was children under the age of five that died from measles. However, it is still important to be aware of the symptoms as there can be complications related to this disease.

Ear infections are common and can be extremely uncomfortable as fluid causes pressure to build in the ear. Bronchitis and laryngitis are also often seen alongside a measles diagnosis. These illnesses are essentially just inflammation of the voice box or main air passageway, which can occur if you’re coughing frequently. One in every 1,000 people with measles will also develop encephalitis, either during the first stage of the disease, or sometimes months later.

Pregnant women are also extremely vulnerable to measles as it has been known to cause low birth weight, preterm labor, and even maternal death.

How to Protect Your Child

There are several different ways that you can protect your child from measles.

The only way that we have to prevent measles that’s almost 100 percent reliable is the MMR vaccine. MMR stands for measles, mumps, and rubella, and this vaccine has been given to children since 1963. In that time, measles was almost entirely eradicated from the United States — a testament to the vaccine’s safety and effectiveness. Between 2000 and 2016, measles deaths dropped by 84 percent worldwide.

It’s important to get both doses in order for the vaccine to be effective.

2. Keep them away from children with measles

If your child is too young to have received both doses of the vaccine, it’s important to keep them away from any child that could potentially have measles. Even if they’ve been fully vaccinated, it’s never a good idea to expose your child to the virus. Parents who think their child may have measles should immediately quarantine them, to avoid infecting others.

If you’re pregnant and think you may have been exposed to the measles virus, you may be given an injection of antibodies called immune serum globulin which can help protect your unborn child from the effects of the disease.

3. Be cautious if they’re on other medications that suppress the immune system

If your child has a weakened immune system or is on a medication that suppresses the immune system, they may not be able to receive the measles vaccine. In this case, it’s incredibly important to ensure that children that your child is exposed to are vaccinated.

Be aware of any news related to the disease in your area and call your doctor immediately if you think your child has been exposed to the virus.

If your child has been exposed to measles and develops the disease, there’s not much you can do other than treat the symptoms and try and make them more comfortable. You can try and keep them cool and reduce their fever with acetaminophen or ibuprofen. Monitor their condition closely and inform your doctor if you think they may be developing complications like an ear infection or bronchitis.

You should also be making sure that your child has enough Vitamin A as low levels of this critical vitamin have been linked to an increased severity of measles symptoms. Large doses of Vitamin A, at least 200,000 IU per child, have been shown to be effective in lessening the severity of symptoms in children at least one year of age.

Keep children hydrated and help them rest as much as they can. If their eyes hurt, encourage them to wear sunglasses, and avoid watching TV. With good care, the disease should run its course in two weeks. 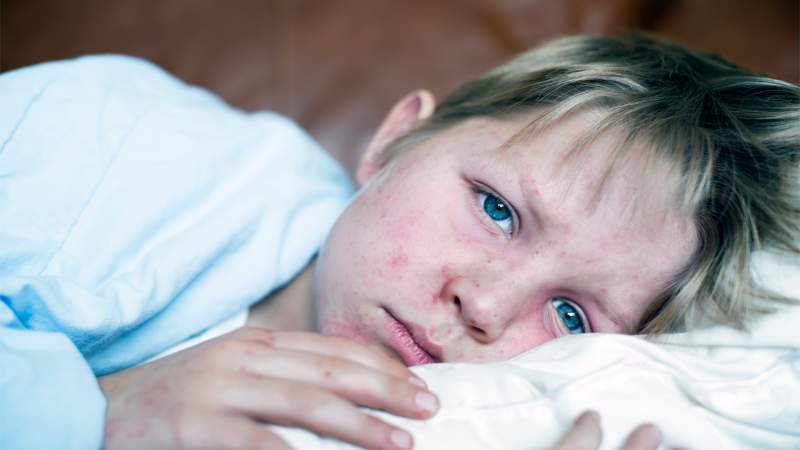