If you’re a parent, summer can be a trying time — keeping up with little ones full-time in the hot sun and dealing with frayed tempers due to heat exhaustion and humidity can make anyone frazzled. If you’re a new parent, chances are you’ve heard a lot of different advice on how to deal with babies in the summer, and the best ways to protect their delicate skin from damaging sun exposure.

There’s no need to stay housebound completely — with these quick tips, you’ll have the confidence you need to make informed decisions about your child’s skin protection, without having to shell out hundreds of dollars for costly products and unnecessary tools. Here are some of the best tips and tricks we’ve found for protecting your baby’s skin in the summer.

1. Keep babies under 6 months old out of direct sunlight

Babies skin is so sensitive that it’s generally recommended that direct sun exposure be avoided for infants that are less than six months old. Before six months old, newborn skin is still developing its protective barrier, which leaves them more vulnerable to microbial infections, chemical damage, and skin disease. This is especially important for babies that are born premature.

If you do need to take your baby out, covering their carrier with a very light receiving blanket will help keep out harmful UV rays. During the hot summer months, it’s best to limit baby’s exposure to sun between the hours of 10 a.m. and 4 p.m., when the sun is most intense; if you need to run errands or want to get out of the house, try to ensure that you’re out and back either before 10 a.m., or after 4 p.m. 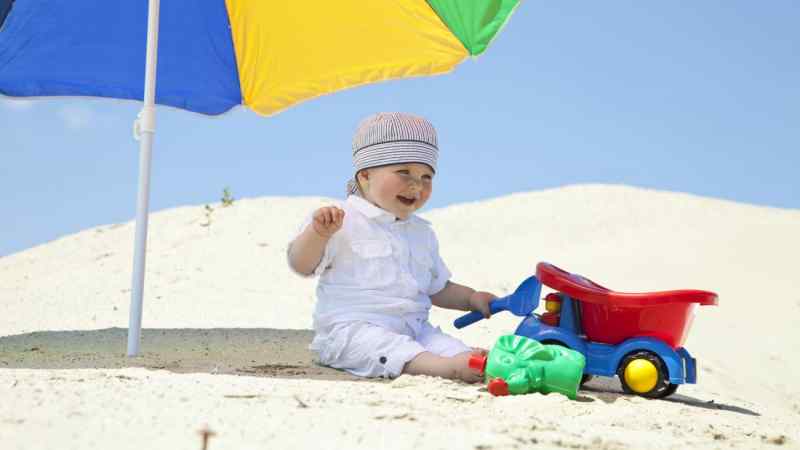 2. Cover exposed skin as much as possible

When you take your infant out in the summer, their delicate, developing skin is extremely vulnerable to sun damage. One of the best ways to ensure that they avoid a burn is to cover up their skin as much as possible without their body temperature rising to unmanageable levels.

Use long shirts and pants, as well as sunbonnets or sunhats to keep the sun away from their skin and scalp. You can even purchase sun protective shirts, onesies, and swimwear, which are certified up to UPF 50+, and are made without chemicals. The onesies and shirts are made of microfiber knit, so they dry quickly, and look just like normal clothing. 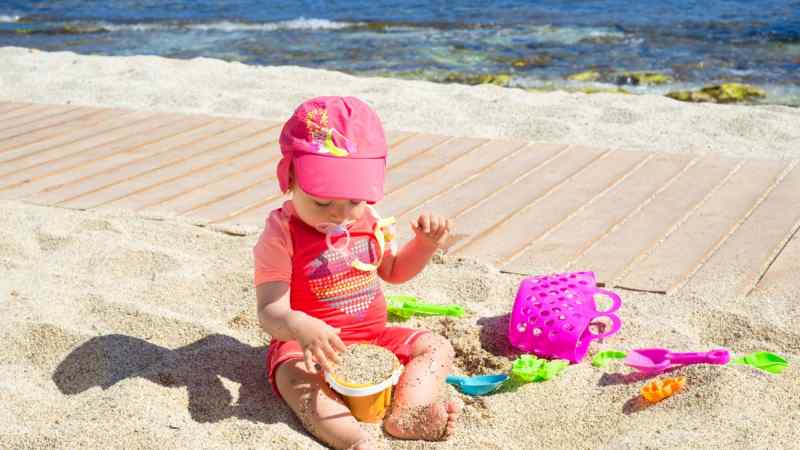 3. If your child’s skin is red, they’re already burned

Young children who experience a single bad burn in childhood are twice as likely to experience a malignant melanoma in adulthood. It’s a shocking statistic, but it’s true. Fortunately, overexposure to the sun is preventable, and there’s no better time to start than in your child’s infancy.

Babies skin is so delicate, and unfortunately, by the time you spot any redness, it’s already too late to prevent a burn. It’s incredibly important to learn how to avoid sun damage before it occurs. If your child does get burned, it’s integral to treat it aggressively so they don’t become dehydrated. Apply cool compresses several times a day, and follow those up with a light, hypoallergenic moisturizer to help their skin recover.

For many years, some parents were counseled never to put sunscreen on their child if they were younger than six months old. However, now the American Academy of Pediatrics suggests that even infants under the age of six months should have sunscreen applied if they are out in the sun; parents should just use the sunscreen only on the parts of their child’s body that are exposed to direct sunlight, like their face, hands, and feet. After they’re older than six months, sunscreen should be used on the baby’s entire body, but keep in mind that babies often suck on their hands and may accidentally rub the sunscreen in their eyes. Keep an eye out for this to ensure that you can wipe your baby’s eyes quickly if necessary.

Sunscreen should be applied at least 15 to 30 minutes before sun exposure, so it can absorb into the skin. When you’re using sunscreen on your child, it’s only effective for as long as it remains on the skin. It’s thought that in order to avoid sweating the sunscreen off completely, it’s best to reapply every two hours. Reapply immediately after your child goes in the water. It’s important to remember to reapply your child’s sunscreen frequently, even on cloudy days, because up to 80 percent of UV rays can penetrate even heavy cloud cover. 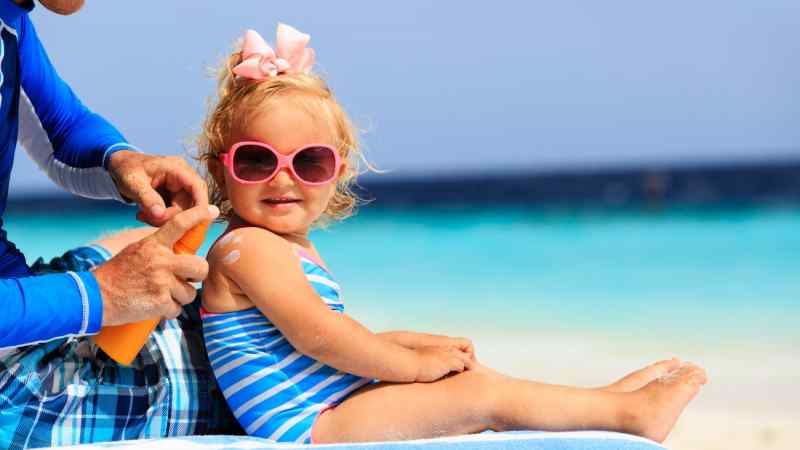 Any sunscreen that you buy for your infant should offer broad-spectrum protection and have a SPF of at least 15 and up. Many sunscreens that are marketed specifically to babies use a mineral formula to block the sun’s rays, rather than chemicals. It’s also recommended that parents avoid using any sunscreen that contains oxybenzone, which has some potential hormonal and chemical side effects.

Before using any sunscreen on your baby, you should check to make sure that it doesn’t irritate them by applying a small amount to an innocuous patch of skin and leaving it for a few hours to see whether a rash develops. If that patch of skin remains clear, then the sunscreen is safe to use.

Babies in sunglasses are an adorable sight, but they’re actually more functional than you would think. Just like we protect our eyes with sunglasses, it’s important to protect baby’s developing eyes with shades — children’s retinas are more sensitive to damage than adults. Look for glasses with 99 percent UV protection to ensure that the glasses are functional, not just a cute accessory. Just because the sunglasses advertise that they ‘block UV rays’ doesn’t mean that they actually do — look for companies that can confidently state that their lenses block 99 to 100 percent of all UV radiation. You should also be wary of sunglasses that seem like too good a deal — they often are, and some of these low-cost brands have actually been recalled in recent years for elevated levels of lead.

8. Be aware of baby in the car

A hot car can be extremely dangerous to a baby. The windows of a car do nothing to block harmful UV rays, so it’s a good idea to apply UV-blocking film to your car windows, and situate the baby’s seat in the middle, as far as possible from the windows on either side.

If you’re traveling in a car with your baby for an extended period of time, you should be aware that the warm environment may cause heat exhaustion, because babies are unable to regulate their body temperatures like adults. Keep them well-hydrated and as cool as possible with the air conditioner. 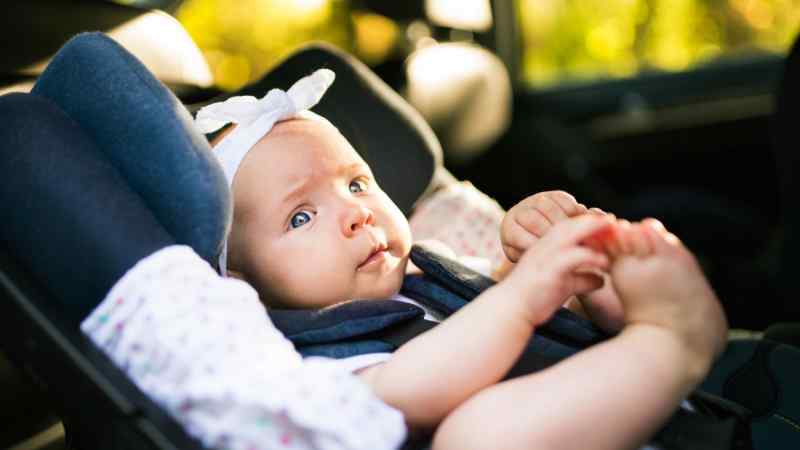 9. Know how to treat heat rash

Some babies skin may react to heat with a bumpy rash known as heat rash. While it’s mostly harmless, it can be irritating and unpleasant for your young one. You can avoid heat rash by dressing your child in loose-fitting clothing and ensuring that they don’t spend too much time strapped to you in a carrier or sling (the combined heat of your bodies may cause heat rash). If your child does develop heat rash, cool their irritated skin with a lukewarm bath.

10. Be aware that some ‘natural’ products are not suitable for babies

Nowadays, touting your products as ‘all-natural’ is common for companies who are eager to cash in on parent’s fears regarding chemicals. However, there are some ingredients that are perfectly natural, but are still potentially irritating for baby’s delicate skin. Olive oil, and sunflower seed oil, have been shown to be potential irritants, as well as Vitamin E oil. You also never know what your child could be allergic to, which makes spot tests extremely important.

It’s a good idea to ensure that children are comfortable in the water at a young age, but be wary of indoor pools, which are often loaded with chemicals. If you can smell an obvious chlorine smell, it’s probably too strong for a young baby. If you decide to take baby into the pool, make sure to protect other swimmers, by using a swim diaper, and making sure to check it immediately before and after going into the water. 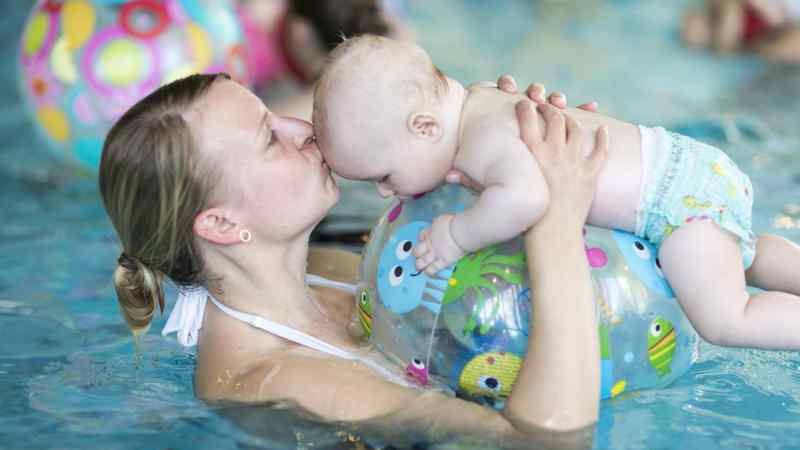