5 Eating Habits That Cause Hair Loss

Most hair loss is just one more indignity of the aging process. By age 50, around 85 percent of men and 40 percent of women have thinning hair. The rate at which your hair thins depends largely on heredity. Other common causes of hair loss include stress, hormonal changes, certain medical conditions, and some medications.

But did you know that a poor diet can accelerate hair loss? Here are five eating habits that contribute to the problem.

1. Eating Too Much Sugar

Researchers haven’t directly linked sugary diets to hair loss, but they do know that sugary, highly glycemic foods trigger inflammation. Inflammation has been pinpointed as a leading cause of hair loss in both men and women.

Carbs and sweet processed foods, such as potatoes, pasta, white rice, breakfast cereals, and pastry, also cause sudden spikes in insulin and androgens. When those bind to hair follicles, the hair falls out.

Carbonated beverages are especially harmful. Not only do they have a high sugar content, but they are acid-forming. In general, going overboard with acidic foods isn’t good for your hair. It gets worse.

Many soft drinks contain the artificial sweetener aspartame. About 80 percent of consumer complaints received by the Food and Drug Administration are related to aspartame’s adverse side effects. The FDA has identified more than 90 symptoms, which include headaches, insomnia, seizures, anxiety attacks, confusion, and yes, hair loss. Considering those alternatives, you’re lucky if hair loss is the only side effect.

The same fat, greasy foods that cause cardiovascular problems cause hair loss, and their nutritional value is nil.

Saturated fatty acids and trans fats upset the delicate hormonal balance required for healthy hair. Scientists once thought that testosterone was to blame for both male- and female-pattern baldness. Testosterone is at the root of the problem, but it converts to the even more harmful dihydrotestosterone. DHT binds to receptors in hair follicles and more or less attacks them. The follicles shrink, and the hair can’t survive.

Elderly people in Japan, China, and India somehow manage to keep their thick, lustrous hair. It’s no coincidence that their diets focus on vegetables, seafood, and grains rather than bacon cheeseburgers and buckets of fried chicken.

3. Eating Too Much Dairy

Pregnant cows are the most common source of commercially sold milk. The milk contains several precursors from which DHT naturally forms. Remember that DHT is your hair’s worst enemy.

The dairy industry doesn’t dispute this, and there is solid evidence that excess insulin contributes to hair loss.

Unfortunately, even pasteurized dairy products contain measurable amounts of pesticides, herbicides, and bacteria. When they enter your bloodstream, your immune system attempts to fight them off. Inflammation and hair loss occur.

Whey and casein proteins are present in milk and cheese, and many people aren’t even aware that they’re allergic to them. Although they don’t experience swelling or break out in hives, an immune response takes place. The resulting inflammation constricts blood flow to the scalp, and hair follicles pay the price.

Plaque builds up on the scalp and miniaturizes hair follicles, effectively thinning the hair.

Hair needs nourishment just like every other part of the body, so deficiencies lead to hair loss. Incorporate recommended amounts of these vitamins and minerals into your diet:

Vitamin C synthesizes collagen to support the scalp and hair follicles. You can find it in citrus fruits, tomatoes, Brussels sprouts, cauliflower, and bell peppers.

This vitamin not only helps prevent hair loss, but it delays graying as well. While it’s tempting to overdose on the stuff, too much vitamin B — or any vitamin or mineral — does more harm than good.

Nuts, chicken, eggs, salmon, lentils, and chickpeas are good sources for the B group.

One study of women with significant hair loss revealed low levels of iron.

Spinach is an excellent remedy. It’s also rich in vitamin C, which helps with iron absorption. Fish, beans, cashews, and tofu are other excellent sources.

Sulfur is, or should be, one of the most prevalent minerals in your body. Protein-rich foods, along with onions, garlic, cabbage, and kale, contain sulfur. It boosts blood circulation, reduces inflammation, and stimulates collagen production.

5. Eating Too Much or Too Little Protein

Hair is a protein fiber, so protein is required to grow new strands and prevent the ones you have from falling out. Protein produces keratin, one of the key components in hair.

Lean meats and foods rich in omega-3 and omega-6 fatty acids, like salmon, are ideal. For women, at least, salmon has been shown to boost hair health. Other good choices include white-meat poultry, pork tenderloin, eggs, soy, walnuts, almonds, and beans.

Eating too much protein can backfire. Dry, brittle hair strands and excessive shedding are signs of protein overload. In Japanese, Chinese, and Indian meals, the protein portion is the smallest one on the plate. Clearly, a strong, healthy head of hair in old age doesn’t require a 12-ounce steak every day.

Many nutritionists recommend multiplying your body weight by 0.37. The result represents the number of grams of protein, on average, that you should consume every day.

Finally, keep things in perspective. If you’re healthy and happy, there are worse things than losing a little hair. 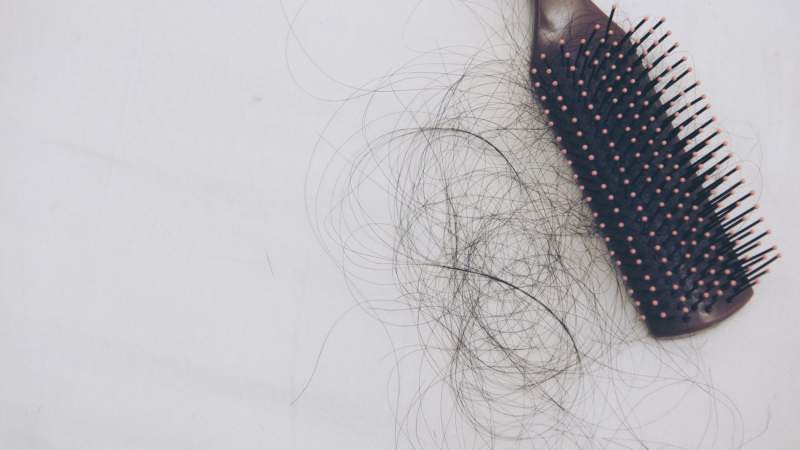