Chronic Obstructive Pulmonary Disease (COPD) is a progressive (meaning that it gets worse as time goes by) disease that negatively impacts a person’s ability to breathe.

COPD sufferers often experience symptoms such as coughing and wheezing, as well as other symptoms that are uncomfortable both physically and psychologically for those who suffer from it.

Tiny blood vessels called capillaries run through the walls of the alveoli. When air reaches the alveoli, oxygen passes through their walls and enters the blood in the capillaries. Simultaneously, carbon dioxide moves from the capillaries into the alveoli in a process called gas exchange. While this process is somewhat difficult to understand, simply put, the problem caused by COPD is that less air flows in and out of the airways. This can be caused by several factors:

There are several factors that can lead to people developing COPD. Most smoke cigarettes, or did in the past. Chronic exposure to things like air pollution, chemical fumes, or dust may also increase the chances of developing COPD. However, cigarettes are by far the leading cause of this disease, and even smokers who quit after many years can see a marked improvement in their health; if you smoke, it is encouraged to discuss with your doctor ways that can help you quit.

As COPD is a progressive disease, many sufferers do not immediately recognize the symptoms as being anything more than a common allergy or they may think that they have a simple sinus infection or are experiencing a bout with asthma. In the early stages of COPD, symptoms may be somewhat mild and not very noticeable.

Unfortunately, by the time symptoms are obvious, the damage is often already done to the lungs. Therefore, it is important to be on the lookout for early signs of COPD. These warning signs may include:

If you notice any of these signs, you should talk to your doctor about the possibility of COPD. Diagnosing this condition in the earlier stages increases your chances of lowering the severity of the disease.

Unfortunately, many patients do not see COPD as a serious illness until symptoms are very advanced. However, it is the third leading cause of death in the United States and millions of people are diagnosed with COPD, while others are not aware that they have it. In its advanced stages, simple, everyday activities such as walking, cooking, working or even doing day to day chores and caring for your personal needs may become impossible. While there is no known way to reverse or cure this disease, there are treatments and lifestyle changes that may improve your quality of life.

Because COPD can have many different underlying causes, such as bronchitis or emphysema, the treatments for COPD will vary slightly depending on your unique needs. Generally treatments focus on controlling COPD symptoms and slowing the progression of the disease. COPD treatment options include many different treatment methods.

The majority of patients with COPD also smoke tobacco. One of the most important steps in managing COPD is to stop smoking immediately. This is one of the most effective ways of stopping the progression of the disease before it becomes life threatening. Doctors may also recommend pulmonary rehabilitation programs that provides exercise regimens designed to boost heart efficiency. This helps your circulatory system to manage better on lower oxygen levels.

Here are a few more lifestyle tips for COPD patients:

One of the biggest dangers for COPD patients is an increased risk of respiratory infections. The mucus buildup caused by damaged lungs can allow dangerous bacteria and viruses to flourish, and the results can be very severe. Therefore, it is important to get an influenza shot and a pneumococcal vaccination each year to reduce disease risks and COPD complications.

When your lungs are not working correctly, it is important to keep the rest of the body strong enough to resist disease and illness. Most doctors recommend that COPD patients follow a high protein diet that is full of vitamins and minerals and get plenty of hydration.

Foods to eat include:

Foods to avoid include:

A COPD diet should also include high levels of calcium and magnesium because these nutrients help to regulate lung and heart functions. COPD patients are at risk for both phosphorous and potassium deficiencies, so be sure to include these nutrients in your diet too.

These are one of the most frequently prescribed COPD treatment options. These inhalers are similar to the ones used by people with asthma, and the apply medication that opens bronchial tubes directly to the affected area. Patients with COPD can carry around an inhaler and use it whenever they notice it becoming difficult to breathe. Depending on the severity of your COPD, a doctor may prescribe a short-acting or long-acting bronchodilator.

Most of the lung damage that COPD patients suffer is due to excessive inflammation harming the lungs on a cellular level. Since steroids help to reduce inflammation in the airways, either oral or inhalant versions of steroids can be very beneficial. However, steroid treatments generally do not work well on their own, so they are often packaged in a combination medication with a bronchodilator.

There are already plenty of medications for controlling COPD symptoms, so the new COPD research is focusing on halting lung damage. Some of the latest COPD treatments include CXCR2 antagonists, soluble epoxide hydrolase inhibitors, and phosphodiesterase-4 inhibitors. These medications all work by blocking certain hormones and enzymes that may cause lung inflammation.

Many patients with COPD struggle due to a lack of oxygen in their bloodstream. If your lungs cannot process enough oxygen, you may need to use a supplemental oxygen device. Some patients just use oxygen therapy while they sleep, and others carry around a portable oxygen tank with them all the time. In the later stages of COPD, oxygen therapy is the most effective and simplest way of extending life, so this treatment is extremely beneficial.

When the cells of the lungs are damaged, the damaged tissue can keep the healthy parts of the lungs from working effectively. Sometimes patients develop large air spaces where lung tissue has decayed, and a bullectomy is a surgery that can reduce these air pockets and make more room for healthy lung tissue to expand and contract.

Another surgical method of COPD treatment removes any damaged lung tissue that is blocking access to healthy tissue. These types of surgeries normally are not necessary for several years after being diagnosed with COPD, but they can eventually be needed for COPD relief.

In very severe cases, people with COPD are risking complete lung failure, and the only treatment option is a lung transplant. Transplants are not recommended for very old or very ill patients who may not survive the very intensive surgery. However, for COPD patients who meet transplant criteria, a lung transplant is the best way to improve quality of life. Though patients will need to take immunosuppressant medications for the rest of their life, they will be able to breathe easier. 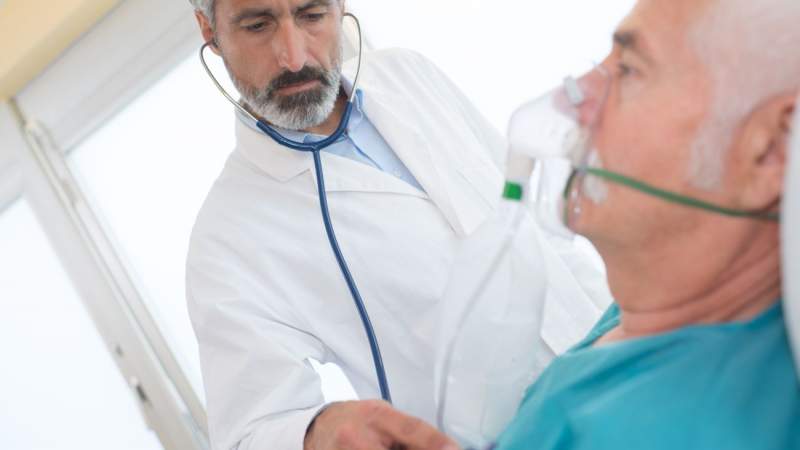