Psoriasis is a skin ailment that impacts millions of people from around the world. Although psoriasis is a common health problem, it is often misunderstood. Here are the top seven myths about psoriasis.

Due to the skin’s reddish and flaky appearance, many onlookers try to keep their distance from psoriasis sufferers. Although psoriasis may look infectious, it is actually not a contagious disease. This is good news for the people who are worried about infecting their family and friends. When properly treated, the unsightly blemishes will gradually disappear.

Contrary to popular belief, psoriasis is not just a minor skin rash. There are actually various kinds of psoriasis. In fact, one of the most severe forms of the disorder is called psoriatic arthritis. Some of the symptoms of psoriatic arthritis include stiffness, swollen joints, and intense pain. If left untreated, the skin blisters can also get infected.

Unfortunately, most at-home remedies are not effective treatments for psoriasis. Although over-the-counter treatments are available as well, they often prove to be unsuccessful. In order to alleviate the annoying symptoms, the person will need to get seen by an actual physician. Some of the options include prescription-strength ointments, laser therapy, prescription pills, and shots.

Research has yet to find a link between psoriasis and the type of food that a person consumes. However, there are several other things that can trigger a flare-up. Cold weather definitely has a major impact on psoriasis. If the person is exposed to the sun for a prolonged period, there is also a good chance that they may experience a flare-up. Some of the other potential triggers include medications, skin injuries, upper respiratory infections, and stress.

Myth #5: There Is Little You Can Do to Prevent Psoriasis

According to a recent study, exercising has the potential to ward off psoriasis. However, simply walking around the neighborhood will not work. The type of exercise needs to be intense. Exercising is especially useful for psoriatic arthritis. It helps to get rid of the accompanying stiffness and improves blood circulation.

Myth #6: There’s only one type of psoriasis

Most people don’t know that psoriasis can actually take five different forms: plaque, guttate, inverse, pustular, and erythrodermic. All of the forms are very different from a regular rash (those tend to go away within a week or so). These forms don’t go away, and the patches are usually scaly or smooth, but all are painful and itchy. Though some forms are more common than others, there are some that are very severe and can have different causes, symptoms, and treatments:

Plaque is the most common form. It can occur anywhere on the body, and the patches are pink in color. This type of form creates itchy scales on the skin and may cause pinpoint bleeding. Treatment may include oral medication, laser therapy, or biologic therapy.

Guttate is the second-most common form and is characterized by dotted reddish sores that are known to appear on arms, legs, and back. It’s very common in children and is usually caused by a bacterial inflection like strep throat.

Inverse is more common in people who are overweight and only occurs on areas of the body where “skin touches other skin” (like armpits, behind the knees, groin and genital area, and under the breasts). With this type of psoriasis, the patches are not scaly but smooth painful red areas. It is usually treated with steroid cream and an antifungal powder.

Pustular is very rare and occurs mostly in adults. This type of form can appear in small patches or can cover large areas. It’s very painful as it’s characterized by tiny pus-filled blisters that appear on top of the affected areas. Suffers may also experience symptoms like fever, muscle weakness, loss of appetite, to name a few.

Erythrodermic is the least common form and according to the National Psoriasis Foundation, it has only occurred in three percent of people. Though every form is painful in its own way, this type covers more than 75 percent of the body in a red peeling rash that is extremely itchy and hot to touch. Common causes of this form including long exposure to the sun, having another type of psoriasis, or taking medications like corticosteroid.

Both eczema and psoriasis are skin conditions, however, there are several differences. First off, there is only one type of eczema and as noted above there are several types of psoriasis. Secondly, eczema tends to occur in the “folds” and “bends” of the skin (elbows, backs of knees) while psoriasis can happen all over the body.  Though both do cause itching, psoriasis can cause joint pain as well as swelling. Eczema does not affect the joints, nor does it cause swelling.

As you can see, there are plenty of myths circulating about psoriasis. If you are suffering from this particular disorder, make sure that you know the facts. 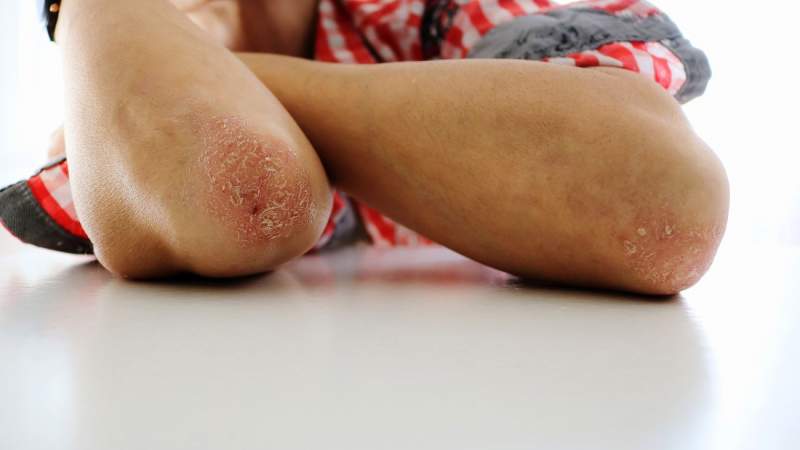