Managing COPD During the Summer

Chronic Obstructive Pulmonary Disease (COPD) is a blanket term used to describe progressive lung diseases that affects many people across the world today. Some of the diseases that fall under this umbrella are emphysema, refractory asthma, and chronic bronchitis.

One of the most debilitating symptoms and signs of COPD is increasing breathlessness, caused by damage to the bronchial airways or air sacs (alveoli) of the lungs. While each individual disease that falls under the umbrella of COPD has its own treatment plan and prognosis, they all share many similar symptoms, which can make life difficult for people who are diagnosed. 80-90 percent of all COPD cases are caused by smoking, and most people who are diagnosed are over 40 years of age and may have been suffering from the disease for several years without noticing the change in their breathing.

It’s estimated that up to 30 million people in the United States are affected by COPD. In fact, the National Heart, Lung, and Blood Institute estimates that almost half of that number have not yet been diagnosed and are suffering in silence. Early screening can identify COPD before a major loss of lung function takes a toll on the patient’s health, but the World Health Organization estimates that the death toll will continue to rise by as much as 30 percent in the next 10 years.

Many people live for years with COPD and don’t realize, because many of the symptoms are insidious, and can creep up on people so gradually that they don’t notice that they’ve suddenly lost the ability to walk up a set of stairs without feeling breathless. The most common symptoms of COPD are shortness of breath, wheezing, and a chronic cough that may or may not come with sputum. Many people notice these symptoms more in the summer, as the hot and humid weather makes it even more difficult for people to breathe with ease.

Most doctors recommend making an appointment if you’re experiencing any of the above symptoms, and have a history of smoking, exposure to second-hand smoke, or exposure to polluted air for a long period of time. Leaving symptoms untreated will only expose you to further damage. There are treatments and medications that can help slow the progression of the disease, and help you lead a more active life.

Many people with COPD have a difficult time managing their symptoms during the hot and humid summer months. As our body experiences higher temperatures, it works harder to cool our vital organs off, so they can keep functioning as normal. This extra energy we expend on cooling down our body is fueled by oxygen, which can only be taken in by lungs that are functioning at their peak. Damaged lungs are simply not able to keep up with the demands of our body.

Even though breathing in the summer is more difficult with COPD, there are many things that you can do help your body. Here are a few tips for managing your COPD in the sweltering summer months.

One of the best ways that you can assist your body this summer is by staying out of the sun. It’s inadvisable to maintain a body temperature of any higher than 98.6 degrees, so it may be worth it for you to invest in air conditioning, if you home doesn’t have that already. Keeping your body cool using external methods like a cold shower or air conditioning uses much less oxygen, which means our lungs don’t have to work as hard.

Another way that you can help your body regulate its own temperature without using up so much oxygen is to stay well hydrated at all times. Most doctors will advise you to drink at least eight glasses of water a day if you have COPD, and this is especially important in the summer months. It’s also a good idea to carry a refillable water bottle with you at all times, just in case you find yourself in need of water to clear your throat.

3. Don’t be surprised by the weather

If you’re suffering with COPD, it’s not a great idea to stay out in the hot sun for a long time or venture out into places that are experiencing intense humidity.

One way to ensure that you’re comfortable is to prepare yourself for any type of weather when you’re out of the house. This means carrying a sweater with you or making sure to avoid places experiencing periods of intense humidity, which can make breathing extremely difficult. A bit of advance preparation will make sure that you get to continue living your life as normal and will never be caught unawares.

4. Remain active as much as possible

Maintaining an active, healthy lifestyle may seem like an impossible task, especially when you’re fighting for every breath. However, regular activity, including cardio exercises, can help strengthen your lungs, which in turn will help you breathe easier. It will also ensure that you avoid the feeling of being housebound, which can be a frustration for some people with COPD. Even if your exercise routine is just walking around the block a few times or going for a light jog after the heat dissipates at night, staying active will help you maintain a healthy, positive outlook.

5. Be aware of allergens

Many people with COPD find the summer almost unbearable because of the high pollen count and the allergens that are out in full force. If you find yourself susceptible to summer allergies, you can limit your exposure to these allergens by staying inside between 10 a.m. and 5 p.m., when pollen is at its peak, and making sure to avoid windy weather, as it tends to contribute to an extremely high pollen count. The best times to be outside are after nightfall, and immediately after periods of heavy rain, when the raindrops dampen any rogue pollen.

6. Avoid inhaling anything out of the ordinary

Another way that you can keep your lungs protected during the summer is to avoid inhaling anything potentially irritating, like smoke, aerosols, or fertilizer. These errant scents aren’t limited to just the summer months, but are much more prevalent, as backyard barbecues, fire pits, and pool cleaning become almost ubiquitous. Not everyone reacts to these scents and chemicals in the same way, but sometimes its hard to know when something will set you off, so it’s easier just to avoid them all together.

If you have COPD, chances are your doctor has already prescribed you an inhaler or nebulizer, which can help you breathe easier during periods of strain. It’s always a good idea to have your medications with you at all time, but this becomes especially important in the summer, when hot and humid days tend to make using these a more frequent occurrence. Check the batteries and external parts of the equipment well, and make sure that they’re ready to go when you need them. If you’re able to purchase a spare, keep it in your car or purse, so you’re never without it. 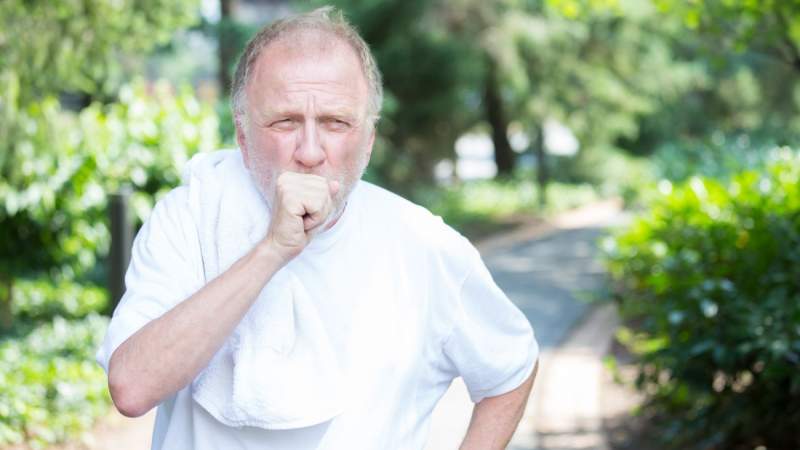