How to Manage Parkinson’s Through Diet & Nutrition

The name of the disorder comes from the doctor who was the first to publish a detailed description of the symptoms. James Parkinson's treatise An Essay on the Shaking Palsy was published in 1817, and since then, doctors have been able to determine the cause of the symptoms, but have not yet discovered why the cells in a diseased brain behave in this way.

There is still no research that is able to say for sure what causes Parkinson’s disease. Doctors have been able to isolate several things that put people at an increased risk for the disease, including exposure to pesticides, prior head injuries, and smoking tobacco. Having a close relative diagnosed with Parkinson’s does increase your chance of developing the disease, but the chances are still small unless you have many family members who have it. People are typically diagnosed with Parkinson’s disease around 60 years of age, and the life expectancy after a diagnosis is typically seven to 14 years.

What are the symptoms?

Typical symptoms of Parkinson's disease include tremors, especially when your body is at rest, loss of smell, trouble sleeping, and problems with your gait. As the disease progresses, you may also notice that your voice is softer and more hoarse than usual, and you may feel dizzy, or faint. While some of these symptoms can point towards other health conditions or just a simple cold, if you have more than one of these symptoms at a time, it’s a good idea to talk to your doctor right away. Once your body starts exhibiting symptoms, it’s a signal that the disease has already damaged the neurons in the substantia nigra region of the brain, which is irreversible.

Although it may be painful to deal with a diagnosis of Parkinson’s disease, there are tangible benefits to seeing a doctor as quickly as possible if you think that you may be experiencing symptoms. Damage can be slowed by medication but not reversed, so you’ll want to start that as soon as possible.

There are several different symptoms of Parkinson’s disease that can have a negative impact on your eating habits, including problems swallowing, difficulties smelling things the way you used to, and constipation. This can lead to nutrient deficiencies which can negatively impact your health.

Some Parkinson’s medications, including the extremely common levodopa, are best taken on an empty stomach or with a meal that’s low in protein, which can lead to a major change in your daily eating habits as you struggle to find a time to take your medication so that its efficacy is maximized. Many people who take levodopa and other Parkinson’s medications find that nausea is a common side effect, which can make getting your required nutrients an even greater challenge.

If you’ve been diagnosed with Parkinson’s disease, maintaining a healthy diet is an important part of any effective treatment plan. Your doctors will recommend certain types of foods, and suggest that you avoid some others, but there’s not one single diet that can treat the disease or its symptoms. The best thing you can do is follow a healthy, well-balanced diet rich in fruits, vegetables, and fiber so that your body remains energized and able to cope with the symptoms you may be experiencing.

Certain symptoms may prevent you from enjoying some foods that you used to appreciate, but a Parkinson’s diagnosis doesn’t need to spell the end of all your favorite foods. There are tons of tools out there that can help you maintain regular eating habits even if you’re experiencing symptoms that make eating difficult. Weighted cutlery and slip-resistant plates are helpful for people who find that their tremors make eating difficult, while others rely on simple tools like straws and lidded cups to assist them in drinking effectively.

One of the biggest questions that people have about Parkinson’s disease and their diet is what they can eat and what they should avoid when they take their medications.

Doctors have found that the efficacy of the medication levodopa is reduced when taken with lots of protein, so they will usually recommend taking it on an empty stomach or with a carbohydrate-rich snack. Doctors recommend that people who are taking MAO-B inhibitors limit their intake of tyramine, which is found in many cured, fermented, and aged products like aged cheeses, sauerkraut, red wine, and soy sauce. Other than these medication-related limitations, doctors suggest that limiting your intake of caffeine and alcohol can also help avoid blood pressure spikes.

Diet is an extremely important component of any Parkinson’s treatment plan. Most doctors recommend sticking to a healthy, well-balanced diet that includes lots of fiber and fluids. Many people with Parkinson’s experience constipation, so making sure that you eat lots of vegetables, fruits (including the peels), legumes, and cereals will help keep you regular. Some people also find that they experience urinary urgency in addition to constipation, which can make drinking the required amount of water a daily challenge. If this is an issue for you, foods with high water content, like watermelon, celery, and grapefruit, can help give your body necessary liquid without the constant trips to the bathroom.

Another common symptom of Parkinson’s disease is low blood pressure, which can be eased with a steady intake of fluid and salt. Doctors recommend around five glasses of water, electrolyte beverages, and juice per day. If you regularly experience muscle cramps, eating lots of foods that contain turmeric (like mustard) and quinine (tonic water) could help. 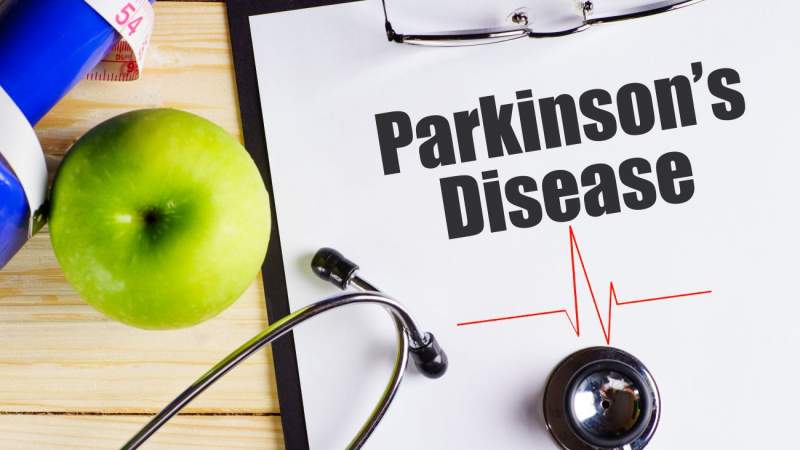