Craziest Exercise Classes You May Have Considered Taking

Over the years, we’ve considered more and more unique methods to shape our bodies, improve our stamina, and encourage our physical health. In the age that we’re in now, we’re used to seeing interesting classes pop up at the gym that mix fun music and dance moves with exercises designed to push our bodies to the limit.

Goat yoga was dreamed in 2016 by an Oregon farmer who was inspired by her happy goats love for people. She has been going through a tough time, and whenever she needed to feel better she went outside to hang out with her goats. When a friend who also happened to be a yoga instructor asked if she could borrow them to perk up one of her classes, she readily agreed.

Goat yoga was a hit in Oregon, and soon spread around the country. Now you can practice yoga amidst a herd of frolicking goats in places from Oregon to California.

Founded in 1969, Jazzercise was one of the first fitness trends to combine dance and fitness. Initially, the classes were simple fitness classes that had a jazz warm up, but when founder Judi Sheppard Missett realized that people were having the most fun during the warm up, she soon changed her classes to involve more fun, active dance movements.

Although jazzercise still exists in studios around the United States, its heyday was in the 80s, when the moves were accented with big hair, clingy leotards, and knit legwarmers.

Fun Fact: The messier the hair, the more fun you’re having.

The Bongo Board was first invented in 1952, when a retired WWII pilot made his daughter a toy inspired by children on the African Gold Coast that he saw balancing on a wooden log and plank.

Although the toy remained popular, it stayed firmly in the category of children’s toys until the 90s, when it was resurrected as a balancing device under the trademark Vew-Do Balance Boards. During balance board classes, participants were led through a series of exercises while on the board that were designed to strengthen the legs and core, while promoting balance, stamina, and control.

Another interesting exercise class that has aimed to mash up two completely separate health trends is aqua spinning. It’s a high-intensity spin class a la SoulCycle that takes place with the bottom half of the body in a small tank of water. The water is heavily salted, which is thought to promote healing, while also providing resistance to the leg muscles, which have to work harder to spin through water. Spinning in the water also puts less strain on delicate knee joints.

Classes cost $40 each, which is a deterrent to some people, but for others is a small price to pay for such an innovative workout. 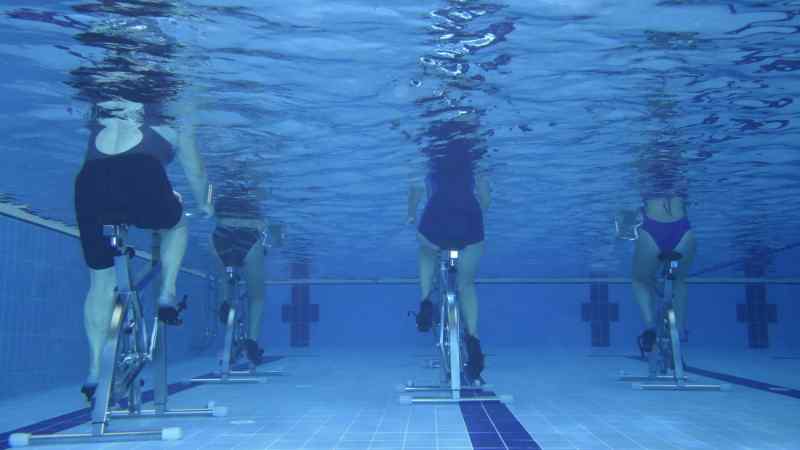 If you’re a millennial, you may have seen the Buns of Steel VHS tapes in your parent’s basement some time during the 90s and early 2000s. Buns of Steel was a lower-body workout designed for one thing and one thing only — a firm, sculpted booty.

Buns of Steel was designed by Greg Smithey, and combines over 50 different lower-body exercises, along with an aerobic warm up, specifically targeted to your derriere. The amazing 80s hair and Day-Glo leotards alone are worth the cost of digging up one of these tapes. 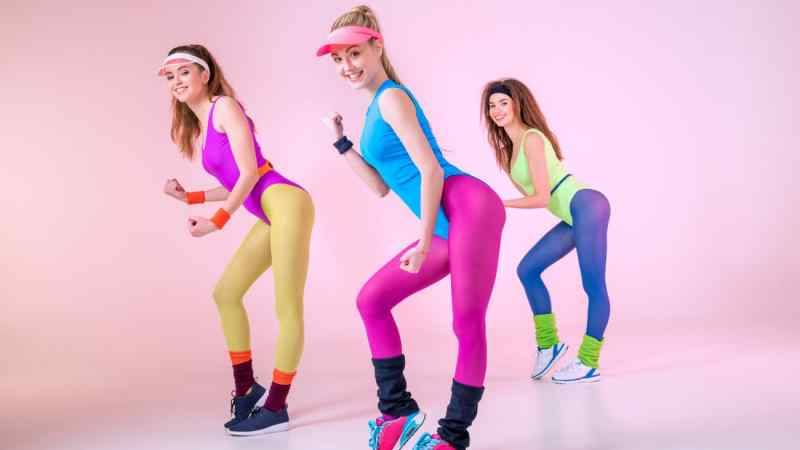 If you love jumping rope and hard rock music, then this class is definitely for you.

Punk Rope was designed by Tim Haft, who came up with the idea of using a jump rope for cardio fitness in 2004. He loved punk music and thought that adding selections of punk and hard rock music to the class would help pump people up and keep them coming back for more. The class is a super-intense cardio workout, as it alternates three to four minutes of solo jump roping with group drills and activities.

The Thighmaster was a popular 1990s fitness tool that was initially introduced as a way for people (women particularly) to work out while their mind was focused elsewhere. It’s basically two loops of padded metal tubing connected by a hinge, and by pushing the tool closed with the knees or thighs, it helps work the hips and abs.

It was originally marketed in infomercials by Suzanne Somers, a popular health spokesperson. While it’s mostly gone out of fashion, you can still find them all over eBay if you want to try one for yourself. 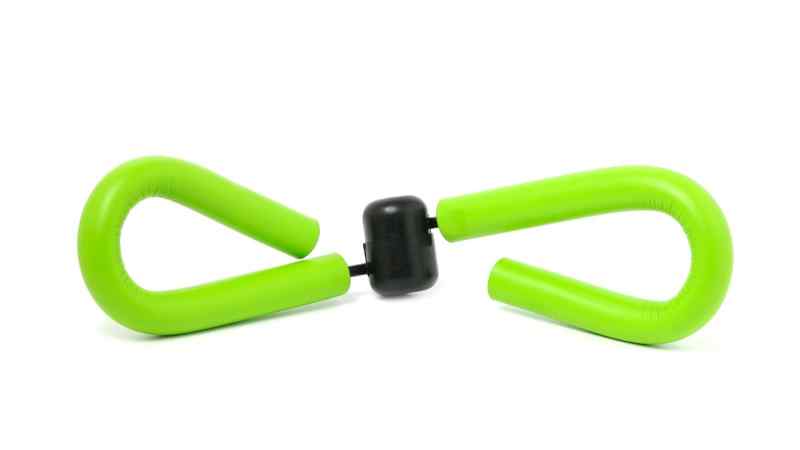 Ecstatic dancing is a practice that has cropped up many times over the course of history. The phrase can be used to describe any kind of free-form dance, but recently has come to be used specifically to describe a movement focused on dance as an open, spiritual practice.
Ecstatic Dance involves people coming together in an open space to dance and be together. It looks similar to a rave, but drugs and alcohol are completely prohibited, as are talking and cameras. The dance takes place in five stages: a warmup with slow, ambient music, an opening circle, an invocation where facilitators vocalize the group’s priorities, the dance program, and a closing circle. Ecstatic dance is considered both exercise and meditation.

Another popular 80s fitness trend that involves more martial arts and less Spandex bodysuits is Tae Bo, a hybrid of boxing and taekwondo that was developed by taekwondo artist Billy Blanks. Tae Bo was popularized through fitness classes in gyms, and take-home VHS tapes.

The high-intensity workout involves martial arts moves done at a rapid pace, which were designed specifically for cardio and strength training rather than combat or self-defense. Blanks also touted the workout for its full-body toning ability and claimed that it burned almost double the calories when compared to a conventional aerobics class. 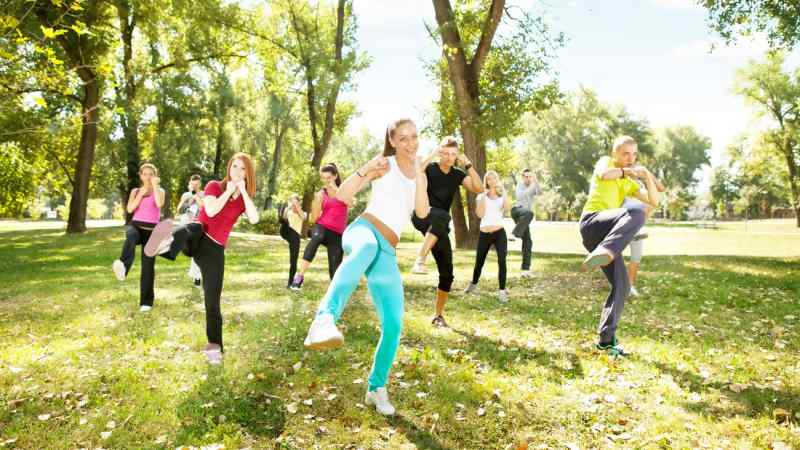 Another form of exercise that can just as easily be described as a type of performance art is contact improvisation. Originally, it was intended as a form of improvised dancing, first practiced by choreographer Steve Paxton.

Paxton sought to encourage performers to push their boundaries, and the practice was designed to do this through increased kinetic awareness, lift training, and a heightened awareness of the mechanics of your own body. Taking inspiration from modern dance, Aikido, and gymnastics, participants are encouraged to use their bodies to connect with other participants. Many instructors refer to it as an “art-sport,” and while it can be beautiful, it’s also a great cardio and strength workout.

Frequently called a “head-to-toe tone up,” hula fit is a quirky exercise routine that looks hilarious but can actually be a great full-body workout. There are plenty of fitness gurus who have put forward excellent hula hoop workouts, but some of the most popular come from Hoopnotica, a studio that does hula-hooping classes and also sells their own how-to DVDs.

If you use an adult hula hoop, which is heavier, you’ll get a much better workout than if you try to use a lighter, smaller child’s size, which is harder to control. Hula-hooping can really tighten up your core and help strengthen your legs and arms. 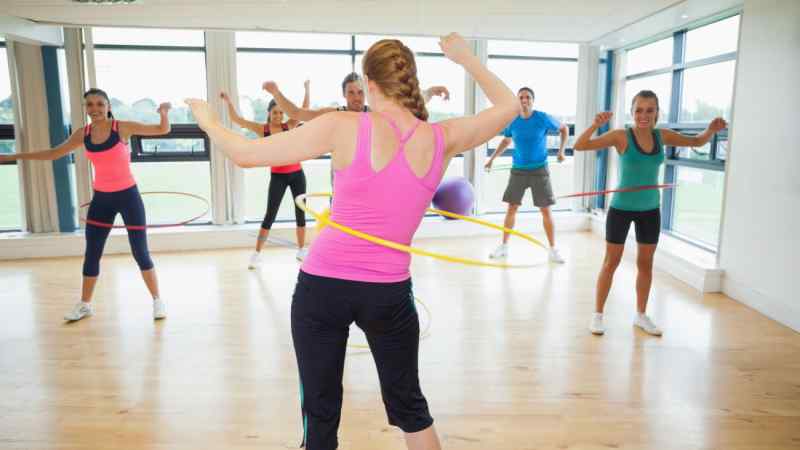 Kangoo Jumps are a type of shoe with built in springs that allows you to do regular workout activities with the added benefit of rebound. Kangoo Jumps shoes actually do more than spring back when you press down. The benefits that they tout include improved core strength, an energized lymphatic system, and better spinal alignment. Depending on where you are, many gyms offer classes with Kangoo Jump shoes, or you can buy your own pair and fit them into your regular workout routine.

Bounce is a fun, active workout that’s essential a regular workout, but on miniature trampolines. Instructors, either online or in person, guide you through a high-energy, dance and martial-art based workout that’s accompanied by strobe lights and an energetic beat, and you’ll use the trampoline as both a jumping surface, exercise mat, and step-stool, to maximize your workout.

After it started in the UK in 2014, the gym has grown steadily and now claims over 26,000 people take their classes every month. 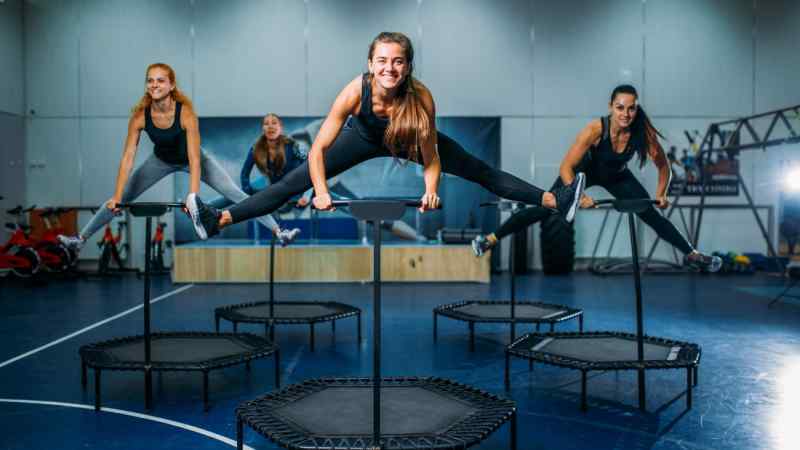